Doesn’t this make your mouth water? Well, it’s a selection of the popular sweets and candies that you’ll find in Mexico. And a few of them are quite similar to the popular Indian sweets.

Square-shaped sweets made from the highly nutritious, amaranth grain are called alegrias (ah-leh-greeh-yahs, meaning “happy”) in Mexico and razgira chikkis or razgira ladoos.(when shaped in the form of small balls) in India.

The Mexican peanut bars called palanquetas de cacahuate (pah-lahn-keh-tahs deh kah-kah-wah-teh) are the singdana chikkis of India.The only difference between the two is that in Mexico, the candy is circular-shaped whereas in India it is square.

Tamarind candies are very popular in both the countries though the variety as well as the extent of their popularity in Mexico is unmatched.

Plátano pancle, the sweetened sun-dried banana is the sukeli from my home state, Maharashtra.

The milk and honey-based dessert called chongos zamoranos named after its place of origin, Zamora in the state of Michoacán tastes like one of the “Bengali” sweets of India.

Indian steamed desserts made of rice flour with a sweet filling and wrapped in banana leaves are very similar in preparation to the Mexican sweet tamales  (tah-mah-lehs) made of masa (mah-sah, corn dough).

Both India and Mexico share a rich tradition of sweets, thanks to the blending of different cultural influences over the past centuries. Mexican sweets are as diverse as those of India. Regional treats like muéganos (mweh-gah-nohs), the fried wheat flour balls or squares coated with jaggery syrup, are common in India too.

Prior to the colonial invention of the wooden whisker called molinillo (moh-leeh-neeh-yoh), hot chocolate in Mexico was froth by pouring it from one cup to another. In South India, the ancient custom of pouring coffee from one cup to another to create foam before it is served, is widely in existence till today and is the essence of South Indian filter coffee. In Veracruz City, I discovered a few traditional cafés following the ancient technique while serving their trademark coffee.

In the cities of Guanajuato (gwah-nah-hwah-toh) and Veracruz, I saw roadside stands selling freshly extracted sugarcane juice – a common sight in India!

Mangoes are a seasonal delicacy in India but I’d never seen nor tasted a more imaginative mango creation like this before. Behold – Mangoes-on-stick in Mexico!!! 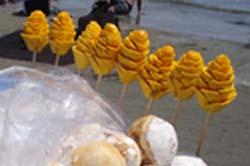 Okay, so I hope that you have enjoyed this post as much as I did! I won’t be surprised if you’ve a sweet tooth after reading this post. It’s time for something special! Go on, you richly deserve this yummy Mexican TREAT 🙂

And, of course, I’d REALLY appreciate your comments/feedback on my posts. It helps me in a number of ways. Thanks!

And now, sit back and enjoy this Hebrew folk music by the “King of The Waltz” Andre Rieu 🙂 Hava Nagila

Until we meet again…take care 🙂

12 thoughts on “Similarities between Mexican and Indian Cuisine – Part III”