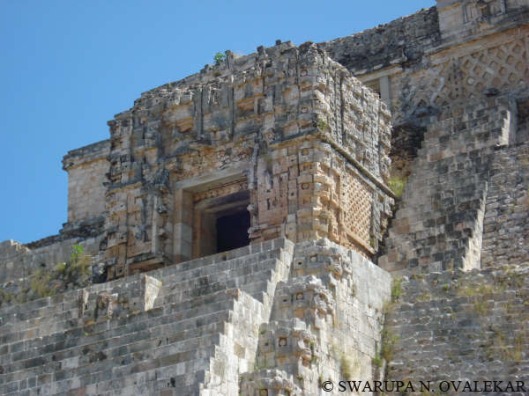 The common architectural elements which India and the South-East Asia share with the Mesoamerican Maya are the pyramids with receding stages, faced with cut stone, and with stairways leading to a stone sanctuary on top. Many of the pyramids share surprisingly common features such as serpent columns and banisters, vaulted galleries and corbeled arches, attached columns, stone cut-out lattices, and Atlantean figures which are all typical of the Puuc style of Yucatan. The temple pyramids in Cambodia gained prominence in the ninth and tenth centuries, a time coinciding with the beginning of the Puuc period.

Dr. V. Ganapati Sthapati, the foremost expert on Vastu Shatra (the ancient Hindu architecture), claimed that there had to be a connection between India and South America based on the old Sanskrit and Tamil scriptures on architecture. His ancestors had built the great Shiva temple in Thanjavur in South India approximately a thousand years ago, and he himself continues to build temples all over the world according to the same principles of Vedic architecture. In 1995, he visited the archaeological zones of the Maya and the Inca in Mexico, Central America and Peru. He noted many similarities with Vedic architecture in terms of design, measurements and construction methods of the ancient structures. In addition, the techniques applied by the Maya to erect their buildings and to hammer their huge stones for temples and pyramids are identical to those still taught and applied by Dr. Sthapati today.

It is noted in the Vastu Shastras that the creator of its architecture is named Mayan. The fundamental principle of Mayan’s architecture and town planning is the “module.” Buildings and towns are to be laid out according to certain multiples of a standard unit. Floor plans, door locations and sizes, wall heights and roofs, all are determined by the modular plan. Incan and Maya structures followed this modular plan. Chichen Itza too conformed to the Vastu Vedic principles of Mayan. The basic similarities include the method of joining and fitting of stones, the use of lime mortar, levelling with a plumb line and triangle, and the corbeling for the roofs. Corbeling is the method by which stones are drawn in layer by layer until they meet or nearly meet to allow a roof slab to be placed on top. The similarity of this technology to that used in India is very significant.

It has been confirmed that the layout of the Maya structures, the locations of doors and windows, proportions of width to length, roof styles, degree of slopes for roofs, column sizes, wall thicknesses, etc., all conform completely to the principles and guidelines as prescribed in the Vastu Shastras of India. Residential layouts are identical to those found in the Indus Valley civilization. As in Maya buildings, the Hindus have been using lime mortar for all of their stone and brick buildings. This can be seen in the monumental creations in Mahabalipuram and the famed stone temples of Thanjavur in the southern state of Tamil Nadu. The outer surfaces of these temples were plastered, embellished in lime mortar and then painted. This method was strong among the Maya too whose structures were plaster-coated and painted in different colours.

So the question is did Maya Danava really travel from South India to Mexico, Central America and Peru, or did he originally come from that region to become a famous architect in India later? This question can only be answered if we take into account the mystical personality of Maya Danava. According to historical records of the Vedic culture, Maya Danava’s influence on man was prevailing for 8000 years. At the same time, he is described as a being from another planetary system, equipped with all sorts of mystic powers and with an astronomic life span. Had the same Maya Danava first worked as an architect in South India and published Vedic texts in order to contribute later to the development of the Maya Culture in Central America, which shows a number of similarities with the Vedic India also in fields different from architecture?

According to Dr. Sthapati, there are two specific archaeological discoveries pertaining to 761 AD, about which most historians are silent, that are significant as possible links of Maya civilization to ancient India. The first one is a wall panel at Piedras Negras in Guatemala belonging to the Mesoamerican Classic Period. It appears that the scene depicted in the panel relates to the great Hindu epic ‘Ramayana’. It shows a king sitting on the throne and one maidservant with two children standing on the right side of the throne. A guard stands behind the three. On the other side of the king, three important personages are standing whereas the vassal chiefs and important feudatories are sitting in front of the throne. The king on the throne is believed to be Lord Ram with his three illustrious brothers standing by his side. The two little children are his two sons with a maid and a guard behind them. This panel is a beautiful piece of sculpture and an evidence of great Maya heritage, their artistic taste and superior creative ability and, above all, an archaeological evidence to prove India’s link with Mexico in the 8th century at least. The artistic design and postures of the figures carved can be compared to those found at the famed Ajanta and Ellora caves in India. This interpretation, however, remains only a plausible one till the hieroglyphics and frescoes surrounding the wall panel are deciphered. Another archaeological discovery at the same place belonging to the same period is a stone stele with a beautiful image of a deity with eight hands (called “ashtabhuja” in Sanskrit). The art style is discernibly Indian as this type of deity is not worshipped in any other religion of the world.

The Vedic origin is further enhanced by the frequency that the elephant motif is found in Maya art, especially the earlier works of the Maya, such as at Copan in Honduras, although the elephant never existed in that region.

This article and a lot many interesting details were part of my epic book titled “Mexico: A grand voyage through the fascinating land with ancient links to India” which I completed in 2010. I set aside these incredible details when I converted the epic book into three e-books Discovering Mexico, Mexico: The Country, Its History & The Maya World and A Guide To Mexican Cuisine which are available for sale on this blog. But I’ll be sharing with you the said information on this blog from time to time. In case you missed my previous two posts on it, you can read them here by clicking on the following links: The Hindu & The Maya Philosophy Of Time  and  The Lost City Of The Monkey God

Finally, guys, I hope you enjoyed reading my work as much as I enjoyed writing it. Please feel free to explore my blog and share anything you find entertaining with your friends through email, Twitter, Facebook, LinkedIn, Tumblr, Pinterest, Google+, StumbleUpon and Press This. You can use the search window to explore older post, or click on the different categories on the side bar on any page.  I’d hate to think that you missed something.  And if you so desire, you can leave a comment or two, you don’t have to say much, just a hi will do. Thanks for stopping by, I hope to see you back  🙂

24 thoughts on “Similarities in Ancient Hindu and Latin American Architecture”