I’m back with the second part of my “Travelling through the North East of India” series. For those of you who have missed the first part, here’s the link:

Travelling through the North East of India: Manipur

Today’s post is on Arunachal Pradesh, the largest of all the seven north-eastern states of India commonly known as “Seven Sister States”. 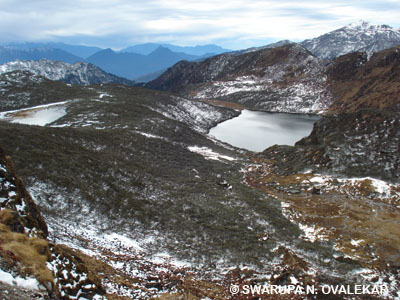 I had travelled to this picturesque region in Nov-Dec 2010.

Today, I’m going to introduce you to this beautiful state which is home to picturesque mountains, unexplored passes, tranquil lakes and famous monasteries.

A bit about Arunachal Pradesh…

It borders the states of Assam and Nagaland to the south, and shares international borders with Bhutan and Tibet in the west, Myanmar in the east and China in the north. Itanagar is the state capital.

It is internationally famous for its extensive geographical diversity with a variety of rare wildlife, flora and fauna.

It has numerous Wildlife Sanctuaries and National Parks and is the only Indian state that can claim to have four major varieties of big cats in its jungles – tiger, leopard, clouded leopard and snow leopard.

More than 500 species of birds have been recorded here, many of which are indigenous and highly endangered.

It has the highest diversity of mammals in the country.

It is also known as the “Orchid State of India” and is host to one of Asia’s largest Orchidarium. Almost every district in this beautiful State has its own exclusive and rare variety of orchids.

Over 80 per cent of this land of enchanting beauty is covered with thick evergreen forests. It is a fabulous destination for adventure tourism.

Like other parts of North East India, a majority of the people native to this State are of Mongoloid stock and speak Tibeto-Burman group of languages. The population mostly comprises of 26 major tribes and over 100 sub-tribes, each with its distinct tradition and customs. It has the largest number of regional languages among Indian states.

It is host to many vibrant and colourful festivals themed on agriculture.

The Indian army has a considerable presence (especially along the Tibetan border), due to concerns about Chinese intentions in the region. Special permits called Inner Line Permits are required to enter Arunachal Pradesh through any of its checkpoints on the border with Assam.

The most popular Tourist Circuit…

The Tezpur-Bhalukpong-Bomdila-Tawang Tourist Circuit (the Western Arunachal circuit) covers Tawang and other parts of the West Kameng District and is the most visited area in Arunachal Pradesh.

Tensions between India and China run high in this area. The Chinese lay claim to the majority of Arunachal Pradesh as they believe it to be an extension of the Tibet Autonomous Region. The dispute has left this part of Arunachal Pradesh heavily militarized. The India-China War of 1962 was a result of this border conflict.

On 20th October, 1962, a well-armed and well-trained Chinese invasion force poured across the border and steamrolled through the poorly equipped and poorly trained Indian troops, soon making it almost all of the way to Tezpur, in the State of Assam – hundreds of kilometers inside Indian territory. Although the Chinese eventually pulled back to the original (but disputed) border in 1963, they had made their point. And today, the Indian Army has a very heavy presence along the road leading to the India-China border to prevent a repeat of the humiliating 1962 invasion.

My journey to Arunachal…

My amazing journey with the Indian Army commenced from the military town of Tezpur in the plains of Assam to the beautiful town of Tawang nestling in the lap of Himalayas at 10,000 feet and to the India-China border at 15,700 feet above sea level.

I started off from Tezpur in a massive military convoy. The vehicle ahead of mine in the convoy was equipped with radar jammers (to protect against terrorist attacks in the strife-torn state of Assam). It was an exhilarating and fun experience!

The road to Tawang and the India-China border is narrow ( and very rough at places) and heavily militarized. Military patrols and convoys stream up and down the Himalayas to supply the far flung Army bases and move troops around.

The narrow road snakes through high mountains and deep valleys (really deep and scary valleys!). Carrying out search and rescue operations is nearly impossible and chances of survival in the deep jungles below are next to nil.

Bhalukpong, 56 KM from Tezpur, is the entry point to Arunachal Pradesh. The place is famous for archaeological ruins of King Bhaluka who was the grandfather of King Bana of Mahabharata fame and an ancient ruler of the region. The Kameng River flows through Bhalukpong…

The convoy reached its destination – Tenga, a small town with a strategic military base and some splendid Himalayan vistas. I stayed here overnight in a beautiful cottage, from where steps led down to a gurgling stream flowing in gay abandon.

The lovely Tenga valley is situated at an altitude of 6,500 feet above sea level. Being a military base I did not photograph the area. But here’s a photograph of Poinsettias in full bloom, taken outside my cottage… 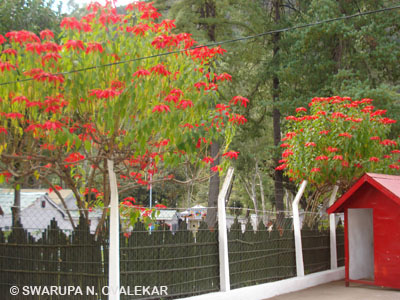 The next morning, a Bolero was waiting for me to continue the journey to Tawang. The road was very rough. I was told that the road in upper reaches remains in a state of disrepair throughout the year due to heavy rains and snowfall, accompanied by frequent landslides.

But the landscape was absolutely brilliant! Waterfalls gushing out and merging into the river below, wild flowers literally everywhere…and rivers flowing through creeks… 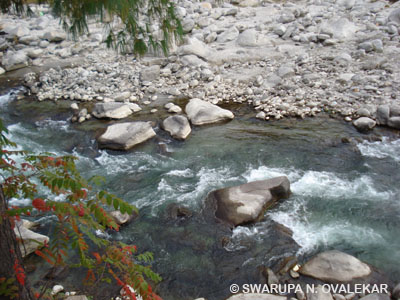 About 109 KM from Bhalukpong, Bomdila is a beautiful small town and the headquarters of West Kameng District. 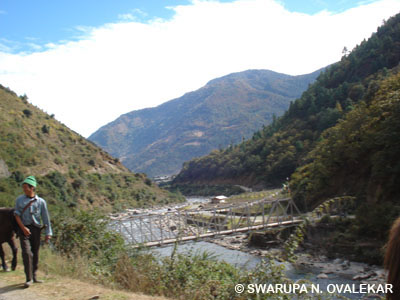 At a height of 8500 feet, it offers a beautiful view of various snow clad Himalayan mountain peaks including the two highest peaks of the state – Kangto and Gorichen.

Dirang is 42 KM from Bomdila. The place is famous for hot water springs with medicinal properties for curing skin ailments.

At 4910 feet, it is at a much lower altitude than Bomdila.

Sengay, a village 19 KM from Dirang…

I stayed overnight at Sengay, an army transit camp. The stay was required in order to get acclimatised to the high altitude in Tawang. Located at a height of around 9000 feet, Sengay not only offers fantastic views of the valley below but also the beautiful sight of wisps of clouds drifting below.

Passing by Baisakhi, another military station, 8 KM beyond Sengay…

I had made an early start from Sengay to avoid the “very dense fog” between Sengay & Baisakhi. I was told that it forms in the afternoon hours, lasting till late in the evening. Local drivers are aware of this phenomenon. It happens as the day temperature rises in the valley below and the hot air moves upwards towards the cooler environs, bringing with it the clouds and simultaneously, the cold mountain winds moves towards the valley below. This movement of clouds creates the dense fog.

We reached Sela Pass, the world’s second highest motorable pass at an altitude of 13,700 feet. It is 61 KM from Dirang on the way to Tawang.

About 14 KM below the Sela pass is Jaswant Garh, the War Memorial dedicated to Jaswant Singh, an Indian soldier who singlehandedly held up the advance of the Chinese military for 72 hours before eventually being overwhelmed by the vast numerical superiority of the Chinese Army during the 1962 Chinese Aggression.

The entrance to the War Memorial…

A plaque describing the story of the brave soldier… 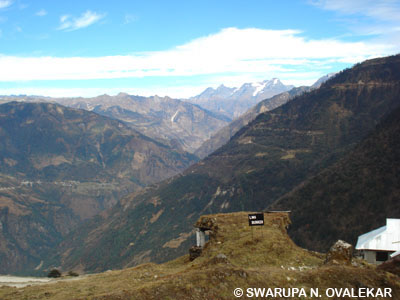 Exploring some of the bunkers was an eye-opening experience! 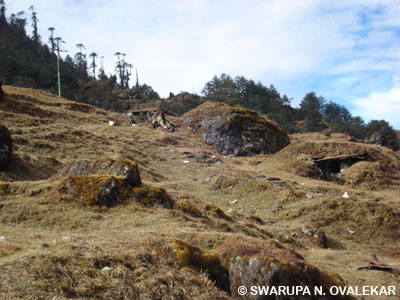 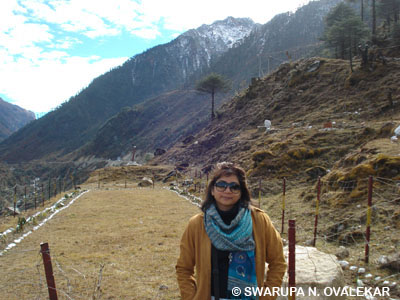 40 KM away from Tawang, and about 2 KM away from the town of Jang, I had my first view of this absolutely spectacular waterfall : the 100-metre high Jang Falls (or Nuranang Falls) 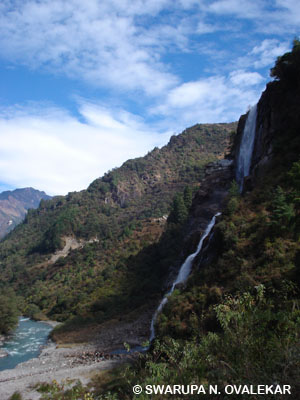 Besides the immense height of this awe inspiring waterfall, the volume of water that cascades down in an enormous din is astounding.

Watch these two videos of mine:

A small hydel plant located nearby generates electricity for local use.

The Nuranang river originates from the Northern slopes of the Sela Pass. Just below the waterfall it falls into the Tawang River which flows into Bhutan, before ultimately draining out into the Brahmaputra.

Back on road to Tawang, I was surprised to see women doing road repair and construction work. I was told that women here have broken into male bastions like driving trucks, road construction, etc. 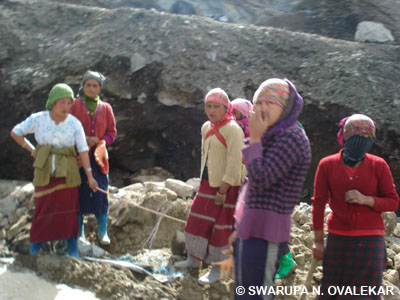 An hour and a half later, I was in Tawang.

Tawang is located at a distance of 183 Kms from Bomdila.  It is the birthplace of the 6th Dalai Lama.

Situated at an altitude of 10,000 feet above sea level, the natural beauty and solitude of this place is very mesmerizing. With more than 100 beautiful natural lakes, splendid cascading waterfalls, and glistening snow-white peaks, Tawang brings you closer to Mother Nature. No wonder it is the most sought out tourist destinations in Arunachal Pradesh.

Perched atop a hill, overlooking the ridge and surrounded by thick clouds, it is Asia’s second largest monastery and India’s largest which controls 17 Gompas in the region. It is the fountainhead of spiritual life for the followers of the Gelukpa sect of the Mahayana School of Buddhism.

The entrance to the Prayer hall… 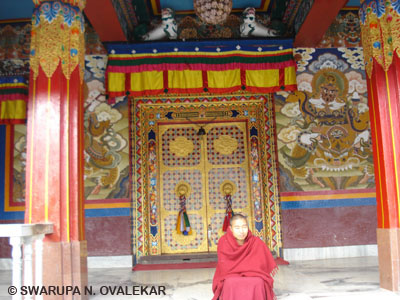 Inside the Prayer hall… 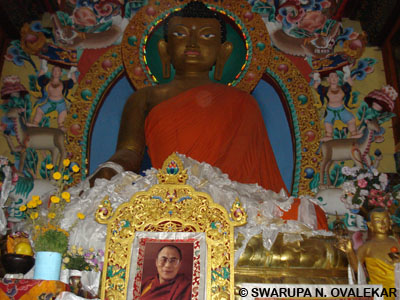 This large library has an impressive collection of ancient books and manuscripts. The famous Buddhist gold inscribed scriptures Kangyur and Tangyur are preserved here.

Ancient urns inside the museum… 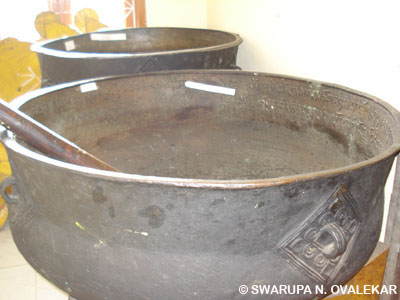 In 1962, Tawang was taken over by invading Chinese troops, who destroyed some portions of the monastery. For six months, the entire district was under the control of Chinese nationalist troops. After their retreat, it was returned to India.

Bumla Pass (at an altitude of above 15,700 ft above sea level ) is located 37 kms away from Tawang. It is one of the most off-beat passes in the world and is also known as the pass through which Dalai Lama entered India, escaping from Tibet.

It is through the Bum La road that the Chinese marched into India during the 1962 Indo-China war. 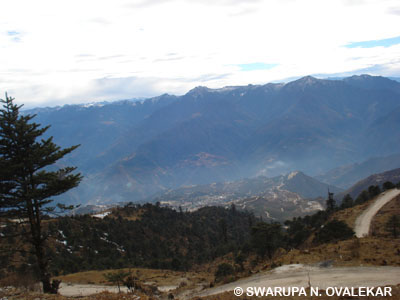 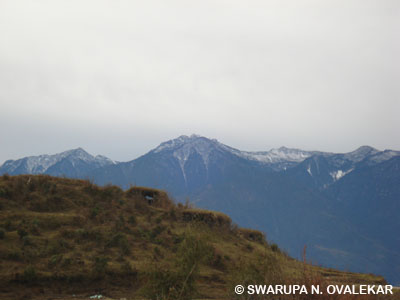 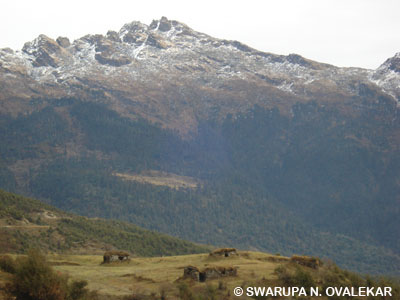 Bum La is the last Indian Army post at the India-China border.

Watch this video of mine taken on the way to the India-China Border:

Here are a few photos of the picturesque lakes and surroundings along the Bum-La road. 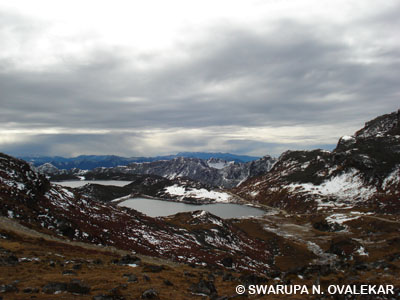 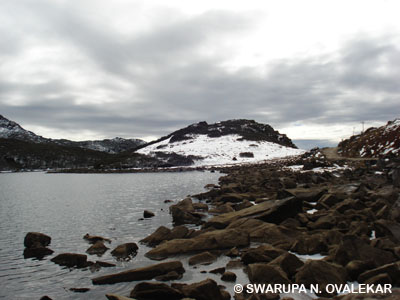 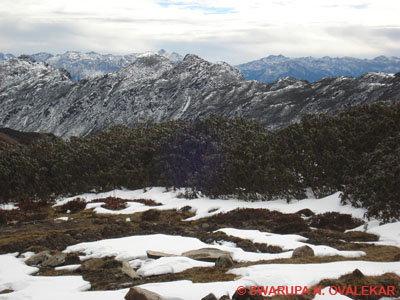 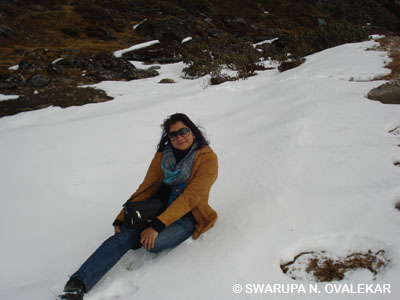 The War Memorial in Tawang…

One of the interesting things that I learnt about Arunachal Pradesh was that its official language was English and Hindi. People speak very good Hindi. This young woman, with whom I chatted briefly, was originally from North India. Like many others from that region, she too had settled in Arunachal Pradesh and made it her home.

Since each tribe has its own language, knowing Hindi is useful as the total number of languages spoken here exceed 50.

Arunachal Pradesh is an amazing destination of extraordinary beauty. Imagine these picturesque landscapes : Rivers running alongside the roads, clouds drifting alongside the mountains below and around you, water falling from astounding heights, beautiful alpine fresh water lakes…wow!  There’s so much more to Arunachal…making it a perfect international travel destination! 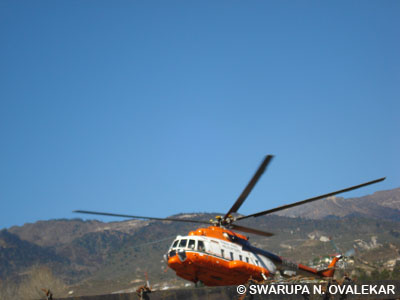 …and was blessed with fantastic views from up above!

Well, I hope you had a great time visiting me. My next post is on the tribal paradise of Nagaland. So, see you soon…till then, take care 🙂

The Hornbill Festival of Nagaland, India

Travelling through the North East of India: Nagaland

If you’re interested in knowing all about Mexico, do check my three e-books which are available for sale on this blog:

If you’re a fan of Mills & Boon novels or love reading romance novels, here’s one for you available for sale on this blog:

31 thoughts on “Travelling through the North East of India: Arunachal Pradesh”