Bullfighting or corrida de toros is a 500-year-old traditional Mexican sport played in a bullring for the entertainment of the audience. This sport, brought to Mexico by Spanish conquistadores (conquerors), involves bulls getting maimed and injured with lances before finally being ceremonially slaughtered by a sword. Bullfighters (or Matadors) and their horses are also often injured in the vicious battles staged to impress the crowds.

Bullfighting in Mexico is similar to the Spanish style of bullfighting.

Mexico has the largest bullfighting ring in the world – the Plaza Mexico in Mexico City – with a seating capacity of up to 50,000 persons.

Thousands of bullfighting events take place annually across the country, mainly during the dry season, from November to March.

The bullfight involves professional toreros (bullfighters) who execute various formal manoeuvres which are performed at close range, after the bull has first been weakened and tired by lances and short spears with barbs which are thrust into and then hang from the bull. The close proximity places the bullfighter at some risk of being gored or trampled by the weakened bull. After the bull has been hooked multiple times behind the shoulder by other matadors in the arena, the bullfight usually concludes with the killing of the bull by a single sword thrust.

Each bullfight is divided into three suertes (acts) or tercios (thirds), each signalled by a bugle call.
The participants first enter the arena in a parade to salute the presiding dignitary, accompanied by band music. 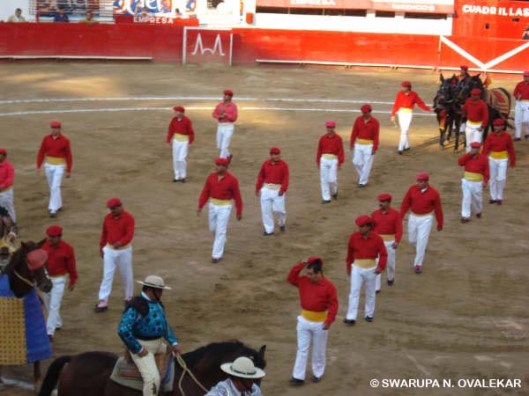 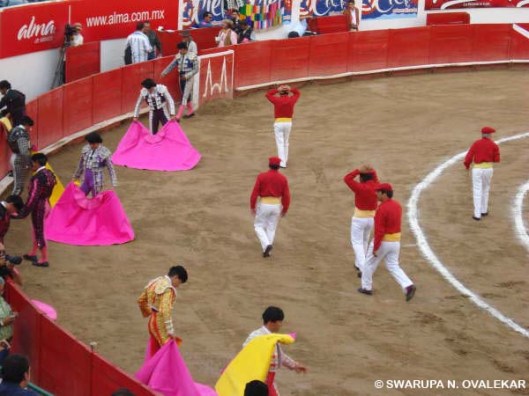 Next, the bull enters the ring to be tested for ferocity by the toreros with large capotes (capes) that are a pinkish-mauve colour on one side and yellow on the other. This is the first stage, the tercio de varas (the third of lances). The torero faces the bull with the capote, performing a series of passes and observing the behaviour and quirks of the bull. This tires out the bull…

Next, a picador armed with a vara (lance) enters the arena atop a heavily padded and blindfolded horse …

He attempts to force a lance between the bull’s shoulder blades to further weaken him, leading to the animal’s first loss of blood. If the picador is successful, the bull will hold its head and horns slightly lower during the following stages of the fight.

The encounter with the picador often fundamentally changes the behaviour of a bull; distracted bulls become more focused and stay on a single target instead of charging at everything that moves.

In the next stage, the tercio de banderillas, the torero will try to stab six metal-tipped spikes called bandilleras into the bull’s shoulder in as clean and elegant a manner as possible. Exhausted and frustrated, but by no means docile, the bull is considered ready for the third and final tercio, the suerte suprema or the tercio de muerte.

The matador re-enters the ring alone with a muleta, a red cape draped from a stick and a sword. 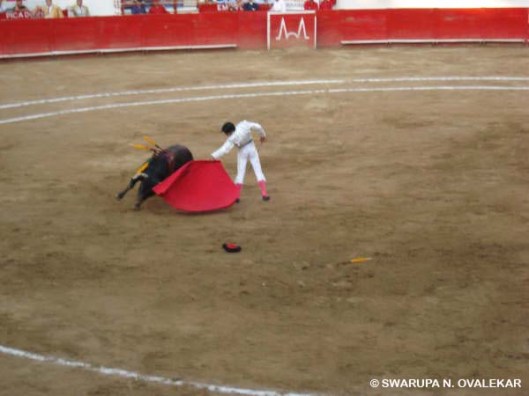 He continues to tire the bull using the muleta to attract the bull in a series of passes which serve the dual purpose of wearing the animal down for the kill and producing the ostensible beautiful display or faena. The crowd, sensing the bravery and finesse of the matador and the spirit of the bull he is up against, shout ‘olé’ which reverberates around the stadium with every pass. When the matador has finished his series of passes or faena for the crowd’s entertainment, he entices the bull to challenge him head-on, standing there with its hooves together.

As it charges, he thrusts his sword between its shoulder blades and, if it is well executed, the bull crumples to the ground. 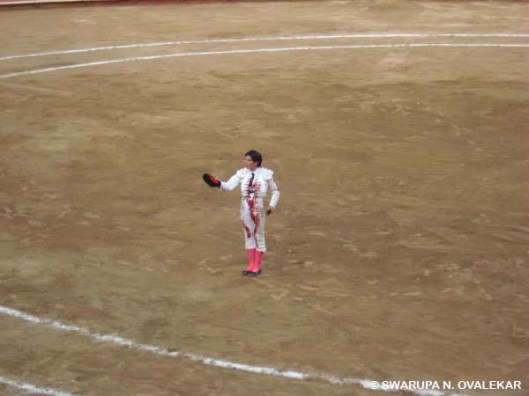 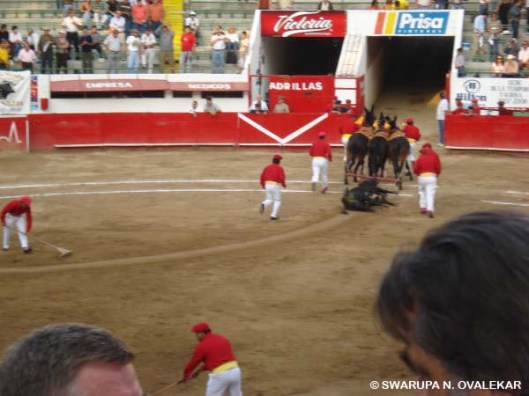 It may seem gruesome, but successful matadors are awarded with a bull’s ears or tail, based on their skills and consistency during the bullfighting season. 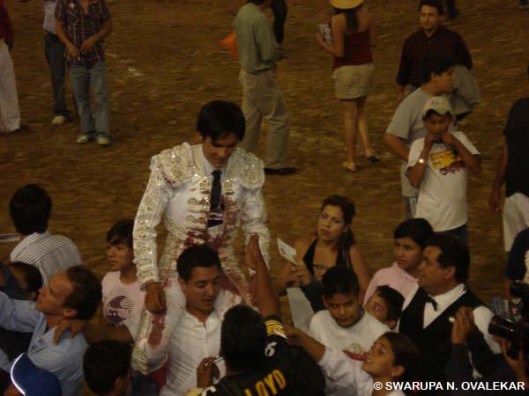 Although matadors are hailed as heroes by those who support the sport, bullfighting cripples one out of four matadors during their careers and one out of ten die.

In Spain, Canary Islands abolished this blood sport in 2001 while Catalonia banned the practice in 2011.

Opposition to this controversial sport is strongly growing in Mexico with anti-bullfighting protestors pointing to its cruelty, as well as its introduction by Spanish colonists in the 1500s to counter claims that it is part of Mexican culture.

However despite opposition, there are many followers of this “blood sport” who prefer to view it as a “fine art” and not a sport, as there are no elements of competition in the proceedings.

You can read more about Mexico and Mexican culture, my travel experiences there and at many other beautiful destinations in Mexico in my ebook: Discovering Mexico

Click here to read the book synopsis and sample chapters and to know how you can buy a copy of my ebook.

If you’re interested in knowing all about Mexico and Mexican cuisine, do check my other two e-books which are also available for sale on this blog:

If you’re a fan of Mills & Boon novels or love reading romance novels, here’s one for you available for sale on this blog:

Please feel free to explore my blog and share anything you find entertaining with your friends through email, Twitter, Facebook, LinkedIn, Tumblr, Pinterest, Google+, StumbleUpon and Press This. You can use the search window to explore older post, or click on the different categories on the side bar on any page. I’d hate to think that you missed something.

Before you leave, here’s a beautiful song by Enrique Iglesias: Cuando Me Enamoro Enjoy 🙂

Thanks for stopping by, I hope to see you again 🙂

17 thoughts on “Bullfighting in Mexico”