Today I’m sharing an extract from one of my e-books on Mexico: Mexico: The Country, Its History & The Maya World

It’s about the Mexican Independence Movement which began in a small church in the present town of Dolores Hidalgo in the state of Guanajuato.

During the late 18th century, the Spanish were forced to open their colonial ports to free trade which allowed colonists a greater role in commerce and permitted widespread trade. The colonists’ new-found economic freedom increased their resentment against Spain. They believed they would benefit even more if they broke away from Spain completely and ran their own economic affairs. Actions taken by the Spanish monarchy to curtail the power of the Catholic Church which had amassed great wealth and huge land in the colony angered many colonists and priests, and induced many clergy to begin to support the idea of independence. By the beginning of the 19th century, criollo (those born in Mexico of Spanish blood) resentment against the gachupines (those born in Spain but living in Mexico) and the government of New Spain had seriously weakened the link between the colony and Spain. Moreover, new political ideas were transforming the world, and memories of the French Revolution and the American War of Independence were still fresh.

The first spark of independence was ignited when the French invaded Spain in 1808, and Napoleon placed his brother Joseph Bonaparte on the throne. Spain’s grip on colonial Mexico weakened. The criollos, bitterly resentful of the gachupines, seized this opportunity to fight for the independence of Mexico. The criollos sought to avoid military confrontation by convincing criollo army officers to sever their allegiance to the gachupines. By claiming loyalty to the defeated King Ferdinand, they aimed to establish Mexico as an independent nation within the deposed king’s Spanish empire and drive out the gachupines claiming authority under Bonaparte’s rule.

The first leaders of the Independence movement were Father Miguel Hidalgo y Costilla, a criollo priest, and Ignacio Allende, an adventurous army officer. When their plans for a coup were discovered, they were forced into premature action. Hidalgo had to make the most significant decision of his life; a decision which marked the first struggle for Mexican independence and that would distinguish Hidalgo as the national hero of the revolution. He had three possible options – to await arrest, flee the town of Dolores or call on the indios (indigenous)and the mestizo (mixed-race) people. 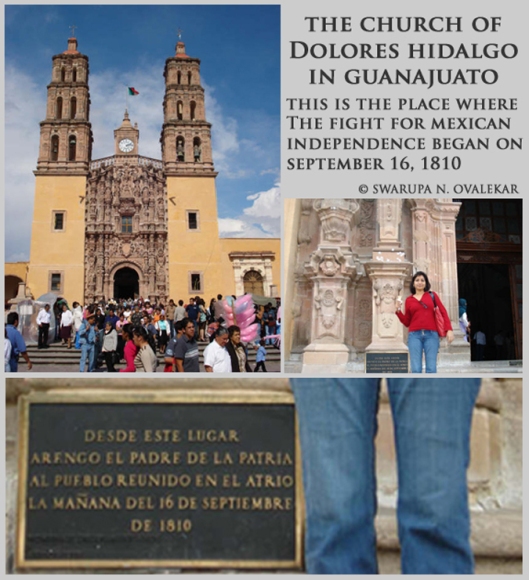 On September 16, 1810, he issued the famous cry ‘Grito de Dolores’ (Á Méxicanos, viva México! meaning Mexicans, long live Mexico!) from his parish church in Dolores which gathered a huge mob of indios and mestizos. He urged the exploited and embittered Mexicans to retaliate against the hated gachupines. With clubs, slings, axes, knives, machetes and intense hatred, the natives took over the towns of San Miguel, Guanajuato and others to the north of the capital. They seized land holdings and slaughtered Spaniards to such an extent that it horrified even the wealthy criollos who had initially supported them.

Hidalgo later regretted the bloodbath he had incited. In the spring of 1811 when his huge but undisciplined army, descended upon Mexico City, he threw away a clear chance to overpower the royalist army and retreated with a few of his associates to Dolores. Months later, Hidalgo, Allende and other ringleaders were captured and executed. Later, the independence movement was led by a mestizo priest, José Maria Morelos. Like Hidalgo, he called for racial and social equality in Mexico, in addition to independence, but he was a better military leader. Morelos was captured by royalist forces in 1815 and executed. After Morelos was killed, the movement continued under Vicente Guerrero, who headed a comparatively small army.

Ironically, it was the introduction of liberal reforms in Spain that finally brought about Mexican Independence. Worried that such reforms might soon cross over to Mexico, many criollos got into the revolutionary spirit. In 1821, defected Royalist General Agustín de Itúrbide met Guerrero and signed a compromise agreement in which the two agreed to combine their forces to bring about independence. Their plan, known as the Plan of Iguala, set forth three mutual guarantees: Mexico would become an independent country, ruled as a limited monarchy; the Roman Catholic Church would be the state church; and criollos would be given the same rights and privileges as the gachupines.

On 27th September, 1821, the Treaty of Córdoba was signed and Mexico was granted independence.

Like it? You can read all about Mexico and my adventures across this beautiful ancient land, right here on my blog. Check out my three e-books available for sale on this blog:

If you’re a fan of Mills & Boon novels or love reading romance novels, here’s one for you on this blog:

Thank you for visiting my blog…do keep visiting 😉

See you soon…till then, take care 🙂

2 thoughts on “The Mexican Independence Movement”