Like Indian cuisine, Mexican cuisine encompasses all the distinct flavors of different cultures and influences to which it has been exposed since ancient times. The culinary traditions of both the countries are a reflection of their rich cultural heritage.

During my nine-month stay in Mexico, I had the opportunity to sample a wide variety of the Mexican cuisine. So, I’m writing this post to share with you my discoveries of popular Mexican food, some of which is quite similar to Indian food.

There are various similarities between Mexican and Indian cuisines right from indigenous cooking tools, common native ingredients to the method of preparations. 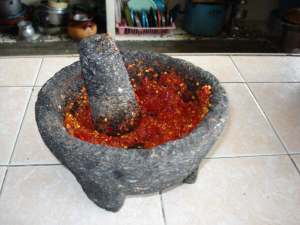 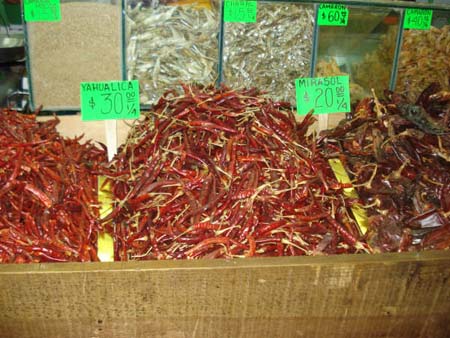 Chiles (both, fresh and dried), tamarind and most of the native spices, fruits and vegetables of Mexico are native to India too. Chiles and pungent spices are extensively used in the cuisines of both the countries.

Although differing in taste, the rich Mexican mole (moh-leh) and adobo (ah-doh-bohs) are comparable to the well-known Indian curry in depth and complexity.

Mexican rice dishes are very similar to the Indian pulaos (or pilaus). While Mexican cuisine relies heavily on corn, rice and beans, no Indian meal is complete without rice and dal (dahl). The staple diet of people from the northern states of India, especially Punjab & Haryana, is rajma (red kidney beans) with rice as well as makki di roti, unleavened flat bread made of corn like the Mexican corn tortilla (tohr-teeh-yah).

The sapodilla plum  called “chikoo” or “sapota” in India is the “zapote” (the chicozapote or chico of the Maya) in Mexico.

The condiments most commonly found on restaurant tables in Mexico, are the red or green salsas or sauces (made of tomatoes and green chiles), a mix of chopped tomatoes, onions and cilantro, pickled shredded nopales (noh-pah-lehs, prickly pear cactus), lemon slices and bottles of branded salsas offering different levels of spiciness.

Smooth salsas are like the popular chutneys of India. The basic Mexican salsa consisting of chopped tomato, onion, chiles (usually serranos or jalapeños) and cilantro is commonly prepared and served in homes and restaurants across India. 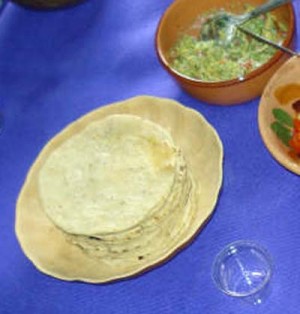 Tortilla, a thin traditional daily bread is the most common Mexican food and accompanies just about every meal.  It is made either from corn or wheat flour but corn tortilla is more popular.

Corn tortillas are prepared by pressing (by hand or by machine) small balls of masa (corn dough). 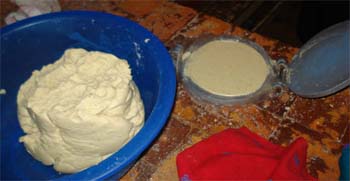 Wheat tortillas are prepared and rolled out just like the rotis or chappatis  of India. These are then wrapped in a cloth and stored in a basket, or in a special plastic container to keep them warm.

Totopos, the hard, thick corn tortillas from the state of Oaxaca (wah-ha-kah) are cooked in a fire oven like the Indian “naan”.

Tortillas are often accompanied by the delicious guacamole (gwah-kah-moh-leh), a traditional Mexican appetizer of mashed ripe avocados, tomatoes, onions, lime juice, salt and cilantro. Restaurants serve guacamole with tortillas or nachos or crackers as free appetizers. In some restaurants, it is freshly prepared right in front of the customer.

I hope you have enjoyed this post as much as I have enjoyed putting it together for you. Very soon, I’ll be back with the next part of this post, “Similarities between Mexican and Indian Cuisines – Part II“, which is equally interesting.

If you think this is good quality information and people would benefit from it, go ahead and share it with the rest.

You can read all about Mexican Cuisine in my book “A Guide to Mexican Cuisine” which is a part of my soon-to-be-published three-book series on Mexico.

Before I say “bye” to you all, here’s a racy track by Ricky Martin : She Bangs (Spanish Version) …Enjoy 🙂

20 thoughts on “Similarities between Mexican and Indian Cuisine – Part I”